Breaking Down the Fatherhood Theme in the Book,

One of the major themes in this book is a daughter’s need for her father.

That need is the most obvious reason, Victoria Davenport, the protagonist in the story, left her affluent lifestyle for the small town of Beautiful, in search of her father.

The prologue takes you back to the heartbreaking experience Victoria’s mother, Alana, had in a forbidden relationship and offers insight into how the bitterness of it framed the decisions Alana made from then on in her life.

In the story, you see the decision to keep Victoria away from her father left a void.

As the story unfolds, you experience the agonizing battle Victoria fought, within herself, to accept that having a mother is enough but desperately desiring, too, to know her father, defied her mother's wishes.

Her journey to Beautiful to find him, unmasked a painful history of a family dealing with the actions of the father that tore the family apart.

In this emotional subplot, two mothers, each at different stages in life and with different sets of circumstances, sacrificed to keep the father in their daughters’ lives.

It exposed the blind love daughters sometimes develop for their fathers, and the impact of a father’s rejection, whether real or perceived, on the decisions daughters often make in adulthood.

While the daughter-father dynamic is a central theme in the book, an intentional focus on fathers, overall, is clear, also, through the experiences of other characters, both male and female.

Everything She Needs examined the critical role of fatherhood from fresh angles, as it brought healing to a broken family.

Everything She Needs is available online at your favorite store. 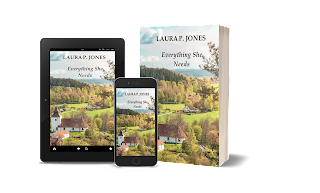